Comet C/2012 V4 (which is mostly likely a return of Comet Pons-Gambart) was discovered on images taken by the solar observatory spacecraft SOHO (though the SWAN instrument used for the discovery watches the entire sky not just the region near the Sun). But SOHO isn’t the only spacecraft watching the vicinity of the Sun. The comet is currently crossing the field of the HI2 instrument on the STEREO-B spacecraft. Thanks to Marco for posting a link to a YouTube video showing the comet in the STEREO images. 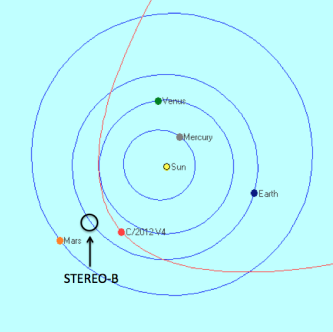 The comet is first visible on images from November 21 and then rapidly brightens and develops a long thin tail by the time of the last high-resolution data from STEREO on December 6. The distance between the comet and STEREO is rapidly decreasing from ~0.9 AU on the 21st to ~0.4 AU on the 6th. The distance will continue to drop to a minimum of 0.28 AU on December 12. This means Pons-Gambart will get much closer to STEREO-B and, as a result, much brighter than seen from Earth. As you can see in the plot of the inner Solar System to the right, STEREO-B is located along the Earth’s orbit but trailing the Earth by 120° or 1/3rd of the way around the Sun.

I downloaded images taken by STEREO-B from their public website and created a movie showing the motion and brightening of C/2012 V4. The comet is very difficult to see at first but becomes much easier to notice halfway through the movie.

The single image below has been annotated to show the direction of motion of the comet as well as the outline of some of the more prominent constellations in the field like Orion, Taurus and Auriga. Also the Earth and Jupiter are also in the field. The Sun is located just off to the left of center. After the comet passes near the Sun it will pop back into view again except this time in the FOV of the HI1 camera which images the space on the other side of the Sun.

Note, the movie above was created from differenced images. In order to pull out more details on the solar wind one image is subtracted from another. That is why the image shows each star and even the comet as positive-negative pairs. The solar wind is the wispy material seen blowing from the left to right.