Comet 103P/Hartley 2 is currently in the middle of Auriga moving to the southeast at a little over 3° per day. With closest approach to Earth on Oct. 20 (0.121 AU) and closest approach to the Sun on Oct. 28 (1.059 AU), the comet is as big and bright as it will probably get for this return. Unfortunately, the bright Full Moon will make observing the comet difficult for the next week and a half. By the beginning of November the Moon will be out of the morning sky and the comet will be easily visible once again. At that time the comet should still be a large 4th magnitude fuzzball as it moves through Gemini. It should fade to magnitude ~6.0 by the end of November and magnitude 7.5 to 8.0 by the end of the year.

Finder charts can be found at Sky and Telescope.

In the previous updates, there was concern that Comet Hartley 2 was not as bright as predicted. We have good data from the 1991 and 1997 returns which suggested that the comet’s 2010 return was running at least a magnitude fainter. There was also a question as to whether this was due to change in the intrinsic brightness of the comet or to difficulty in measuring the brightness of such a large object.

Based on the recent data (up to Oct 18), the apparent ‘faintness’ of the comet has more to do with measuring a large, low surface brightness coma than any intrinsic fading. 103P’s coma is LARGE. My most recent CCD images from Oct. 17 (see image further below) shows a coma over 70′ across (~1.2°). Other CCD observers such as Francois Kugel of France have reported coma measurements of 1° or larger. For comparison, the Moon’s average apparent diameter is 31′ so the comet appears ~2.3 times larger than the Moon. Only observers at very dark sites (lm of 6.5 or fainter) will be able to see the full extent of the coma with the naked eye or even optical aid. As a result, many visual observers (myself included) are not seeing the entire coma and have been underestimating the brightness of Hartley 2.

The brightest visual magnitude estimates are in the 4.5 to 5.0 range. Juan José González has consistently found the comet to be magnitude 5.0 or brighter over the past 2 weeks from extremely dark sites in northern Spain. My own CCD measurement from Oct. 17 was magnitude 4.6 so it’s probably safe to say the comet is currently a 4th magnitude object. If it brightens and fades at the same rate as it did in 1991 and 1997 then the comet is currently near its brightest and we can only expect another 0.1 to 0.2 magnitude brightening before perihelion. Unfortunately with the Moon now dominating the morning sky, the comet may actually appear fainter as bright moonlight washes out much of the coma.

The three lightcurves below are updates of the ones from my previous posts. Nothing has changed except for the addition of recent data (valid to Oct 18).

Lightcurve 1 : Apparent magnitude of Comet 103P versus time from perihelion. For comparison, the expected brightness of the comet (based on observations from the 1997 return) is also plotted (dashed line). Visual magnitude estimates (red circles) are from the ICQ, CometObs and COBS while the CCD measurements (blue diamonds) are by Carl Hergenrother.

Lightcurve 2 : Heliocentric magnitude of Comet 103P versus time from perihelion. Magnitudes are normalized to a distance of 1 AU from Earth and Sun and to o° phase angle. For comparison, visual magnitude observations from the 1991 return (dark grey boxes) and 1997 return (light grey circles) are also plotted. Visual magnitude estimates (red circles) are from the ICQ, CometObs and COBS while the CCD measurements (blue diamonds) are by Carl Hergenrother. 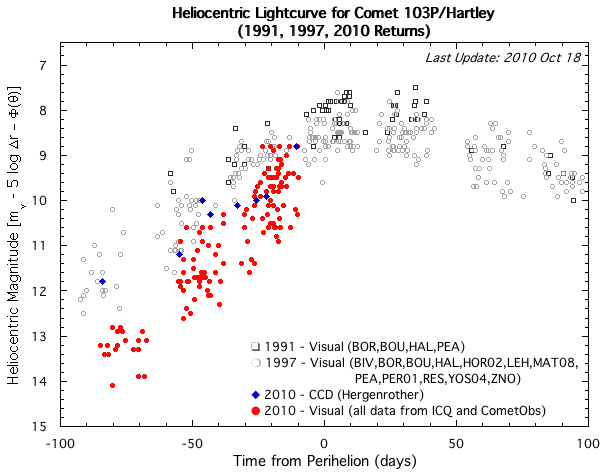 Lightcurve 3 : Heliocentric magnitude of Comet 103P versus heliocentric distance. Magnitudes are normalized to a distance of 1 AU from Earth and Sun and to o° phase angle. For comparison, visual magnitude observations from the 1991 return (dark grey boxes) and 1997 return (light grey circles) are also plotted. Visual magnitude estimates (red circles) are from the ICQ, CometObs and COBS while the CCD measurements (blue diamonds) are by Carl Hergenrother.

Closest approach to Earth occurred on Oct. 20 at 0.121 AU (11.25 million miles / 18 million km / ~48 lunar distances). The image below was taken a few nights earlier on Oct. 17 with a 10.6-cm refractor operated by Global-Rent-a-Scopes in New Mexico. Due to the rapid motion of the comet I was able to do a median combine on the 13 60-sec exposures and remove most of the stars. The remaining stellar signal can be seen as short fuzzy streaks. When the contrast is stretched the coma extends to a diameter of 71′. At the time the image was taken, the comet was 0.123 AU from Earth. Using these 2 bits of information we can determine the actual size of the coma at ~236,000 miles or ~378,000 km across which is roughly the distance from Earth to the Moon. Though large, the coma is mostly empty space filled with a scattering of cometary dust and gas. The nucleus responsible for producing all of this dust and gas is much, much smaller. At only ~1.2 km across, the nucleus is swamped by the glow of the coma and is not directly visible at this time (at least not at visible wavelengths, it could be directly observed at IR wavelengths).

The image (as well as those by others) shows a faint dust tail extending to the west-south-west. On the Oct. 17 image its length was just under 1°. Based on images from the 1991 return I’m surprised that we haven’t seen evidence of a long, narrow gas tail yet. [Added later: After reading Nicolas Biver’s recent posting on comets-ml, I’m of the opinion that the tail in my images is the ion tail. According to his calculations, the ion tail should be in a position angle (PA) of ~245° while the dust tail is at a PA of ~296°. The tail in the Oct. 17 image has a PA of 245° so it is an ion tail. It will be interesting to see if this tail lengthens in the coming weeks. Also to watch is the appearance of a dust trail as we pass through the orbit plane in early November.)

The next image was taken with a single-shot color CCD. The image only shows the inner coma of the comet but does a good job of representing the color and appearance of the comet in small telescopes.