A brilliant fireball was seen over Utah a few minutes past midnight last night. Video images give the time of the fireball as ~12:07 am MST (7:07 UT). At least 2 comments to this blog describe the event.

Did you guys see the one in Bountiful Utah a half an hour ago Nov. 18th 2009 12:12 A.M. It had to be at least 30 feet wide with a fire blazing tail that lasted for a couple of seconds stringing out at least a mile long and it lit up the dark night like it was a really bright sunny day. The kind of day you really need to wear sunglasses from horizon to horizon for at least 6 seconds it threw my heart up into my throat and I received an immediate and outrageous adrenalin rush. This experience was by far the coolest thing I have ever seen in the night sky. If anybody else saw this please post and I really hope someone or somebodys business buildings camera got this on tape and they post it soon. I really want to relive that moment again… All I can say is WOW…

KSL TV has a whole bunch of videos listed on their website. Especially check out Patrick Wiggins video where he gives a great and thorough explanation of what the fireball was. Some of the videos show the actual fireball in the sky while others show the ground being lit up as bright as day. Further news stories can be found at The Salt Lake Tribune and Spaceweather.com.

Six or so hours later, as the sun was rising, a ghostly blue trail was observed over Utah. This trail appears similar to those seen after other bright fireballs. What is amazing is that trail had not dissipated after such a long time. Note, the crazy meandering pattern of the trail does not mean the fireball was moving erratically. The erratic pattern of the trail is due to varying wind speeds and directions in the upper atmosphere.

So far I have not seen any images or videos of the fireball. All the videos and images just show the ground or sky lighting up. As Miah wrote above, the fireball lit up the ground as bright as day.

Though it was probably below the horizon as seen from Tucson, the sky did brighten towards the north. My north facing meteor camera did detect a brightening of the northern sky. Though I recognized it as something unusual when I looked over the data this morning, I deleted the data since there was no obvious meteor in the field. Only later did I read about the Utah fireball. Luckily the MMT all-sky cam picked up the flash from Mount Hopkins, just south of Tucson. The flash was observed to the north at the exact time of the fireball so there is no doubt they are related. If the flash was seen as far south as Tucson, it is likely that it was also seen from a wide area including the states of UT, AZ, NM, CO, WY, ID, CA,NV, and OR. 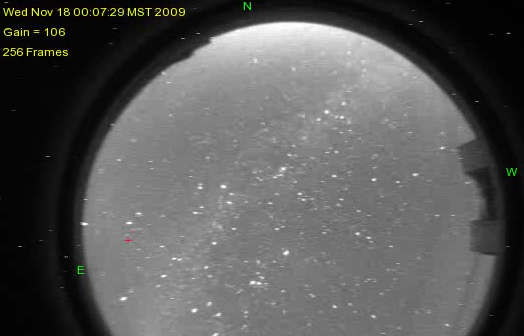 Though the fireball occurred at a time when the Leonids were at their best, it is doubtful it is related to the Leonids. The Leonids are extremely fast meteors, in fact they are almost as fast as meteors can get (~70 km/s). As a result, Leonids rarely last more than a second and usually burn out in one very quick burst. The fact that this fireball lasted for some time (~5 seconds) means it was a much slower meteor that probably descended to a low altitude (~20-50 km). It is more likely it was caused by a small (0.5 to 2 meter) asteroid.