Note: Most of this article was first posted a year ago. It has been updated to include predictions for this year’s Leonid display.

The Leonids are the meteor storm-producing shower against which all other showers are measured. In most years the Leonids are a rather minor shower producing up to 15 meteors per hour, but on occasion they can produce some of the most spectacular meteor displays ever seen.

The Leonids are the result of dust released by Comet Tempel-Tuttle. Similar to the stories of the discoveries of Comets Encke (parent of the Taurids) and Biela (parent of the Andromedids), Comet Tempel-Tuttle was observed a few times before its periodic nature was noted. The first sighting happened way back in 1366 when the comet was observed by Chinese astronomers. Though the Chinese reported very accurate positions of the comet, especially impressive in an age without telescopes, the science of computing comet orbits had not yet been invented. Hence, there was no way to for them to know if this comet could return.

Fast forwarding a little over 3 centuries, Gottfried Kirch of Guben, Germany, finds a new comet on the night of 1699 October 26. Unfortunately, the comet is no where to be found on later nights. We now know that this was Comet Tempel-Tuttle and it was moving to the south so rapidly that the comet was not observable from Germany on the nights after Kirch’s discovery.

The comet would have to wait another ~167 years before it was found again. This time two of the 19th centuries premiere comet hunters, Ernest W. L. Tempel (Marseille, France) and Horace P. Tuttle (Cambridge, MA), found the comet almost 3 weeks apart. Tempel found the comet first on the night of 1865 December 19. Since news traveled slow in those days, the comet was independently discovered by Tuttle on 1866 January 9 before the news of Tempel’s discovery reached America. Not only was the periodic nature of the comet recognized at that time but so was its association with the Leonid meteors.

The comet resides on an orbit that spans from just inside the orbit of the Earth (0.98 AU) to slightly beyond the orbit of Uranus (19.7 AU). It takes the comet ~33 years to orbit the Sun. The the comet last passed perihelion (closest distance to the Sun) in 1998 and was well observed at that time. 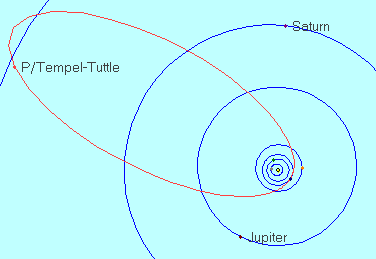 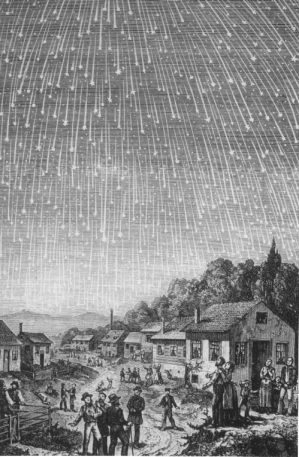 The most famous depiction of the 1833 meteor storm. It was actually produced in 1889 for the Adventist book ‘Bible Readings for the Home Circle’ based on a first-person account of the 1833 storm by minister Joseph Harvey Waggoner on his way from Florida to New Orleans.

The first recorded appearance of the Leonids was in 902 AD when the shower was seen from Italy and Egypt. For the next few centuries, impressive Leonid displays were observed every 33 to 200 years or so.

Two Leonid storms stand out from all the others. On 1833 November 13, the entire eastern United States was awaken to a sight very few had every seen. The sky appeared to be filled with meteors. Modern researchers now know the cause of this outburst. It is estimated that a rate of up to ~70,000 meteors per hour was observed. That works out to ~20 meteor per second.

The 1833 storm marks the dawning of the modern age of meteor science. It was due to observations of this storm that astronomers first recognized that meteors originate in space. About 30 years later, after the discovery of Comets Swift-Tuttle (parent of the Perseids) and Tempel-Tuttle (the parent of the Leonids), the connection between comets and meteor showers was made.

The 1833 storm ranks as one of the 2 best meteor displays in recorded history. 133 years after the 1833 storm, the Leonids once again set the skies ablaze. On the night of 1966 November 17, the western United States experienced a storm just as strong as the 1833 storm.

When the comet returned in 1998, there were many predictions for spectacular Leonid activity. Though meteor rates never got close to that seen in 1833 or 1966, rates as high as a few thousand meteors per hour were observed in multiple years. The best meteor shower I have ever seen was the 1998 Leonid fireball display. Though I would observe Leonid displays with much higher rates of meteors, the sheer number of extremely bright meteors in 1998 was breathtaking.

Predictions for the 2009 Leonids

Now that it is over 11 years since the perihelion of Comet Tempel-Tuttle, what can we expect. In most years when the comet is not in the vicinity of Earth (which is true this year), the Leonids are a nice but relatively light shower with rates up to 15 meteors per hour.

This year the peak is predicted for the morning of November 17. But there are predictions by a number of different research teams for enhanced activity this year. The International Meteor Organization summarizes this year’s prediction with the following taken from their 2008 Meteor Calendar:

This year may produce another enhanced return of the Leonid meteor shower, with ZHR hourly rates expected to exceed 150+ according to independent studies by Jérémie Vaubaillon, Mikhail Maslov, Esko Lyytinen (WGN), David Asher, Mikiya Sato and their respective collaborators. The main peak(s) are expected to occur in the night of November 17 to 18 around 22h00 UT (= 17h00 US Eastern, 23h00 Central Europe, 3h30 India, 6h00 Beijing), although variable activity may happen at almost any stage between November 16 and 18. Continuous monitoring is necessary. Leonids are generally only visible after local midnight from any longitude, with the exception of some long Earth-grazing Leonids before midnight when the radiant is still very low.

What does this mean? Most of us, especially in the United States, will only see the “normal” maximum on the mornings of November 17 and 18 with rates on the order of 20-50 per hour. Observers in the Far East and central Asia may see rates as high as 100-200 per hour on the morning of November 17. The following times may see enhanced activity as the Earth encounters dense dust trails created by Comet Tempel-Tuttle during some of its past perihelion passages. Note, the times are for the predicted peak in activity. The dust trails are wide so expect enhanced activity for a few hours before and after the predicted peak times.

The International Meteor Organization has a “live” graph of reported Leonid activity at their website.

The best way to see the Leonids is to find the darkest site possible. Even if you are in brightly lit area, some Leonids will be observable. The Leonids, like many meteor showers, are only observable after midnight. You will not see any Leonids in the evening. The best time is from 2am till the start of dawn. The meteors will appear to radiate from the east from a spot in the constellation of Leo. Leonids are very fast and each individual meteor will only last for less than a second. Some of the Leonids may be bright and they often leave behind faint glowing trails that can last from a second to many minutes after the meteor occurred.

As for the future, we may have seen the end of the great Leonid storms. The orbits of the Leonids and Comet Tempel-Tuttle are slowly moving away from Earth due to the gravity of the planets. Though there may be Leonid displays with meteor rates as high as hundreds to a few thousand per hour around the time of Comet Tempel-Tuttle’s next perihelion in 2031, there will be no great storms. There is a possibility of one last hurrah for the Leonids around the time of its perihelion in 2131.