This blog usually focuses on comets, asteroids and meteors. This post focuses on a type of object that hasn’t mentioned on the blog so far.

Nova Scuti 2009 is a newly discovered nova first seen on 2009 Nov. 8.37 UT. The object was found by Japanese amateur H. Nishimura of Miyawaki, Kakegawa with a commercial off-the-shelf Canon Eos 5D and Minolta 120mm lens. Since the nova is a variable star, it now has the permanent variable star designation V496 Scuti.

At discovery the nova was around magnitude ~8.5. Since then it has brightened to around magnitude 7.5. Friend of the blog Salvador Aguirre estimated a brightness of 8.4 on Nov 10.06 and Nov 11.11 UT. I was able to make brightness estimates of magnitude 8.5 on Nov. 11.08, 7.6 on Nov 14.10, and 7.6 on Nov. 15.08 UT. The nova is probably near its brightest though these objects can surprise. Most likely, it will start fade in the next few days. The nova will require binoculars or a small telescope to see. It is located at

The image below was taken last night with an old Pentax Takumar 200mm f/4 lens. The nova is the star between the two tick marks. 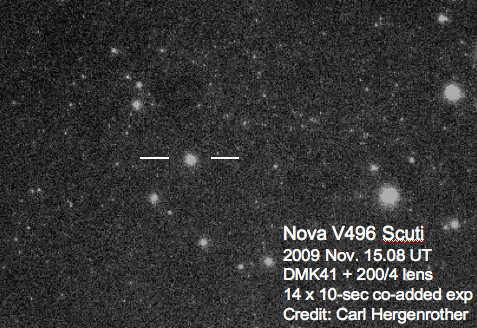 For more on what novae are see the following articles at the American Association of Variable Star Observers (AAVSO) (2nd AAVSO article) and Wikipedia. In short, novae are explosions on the surface of white dwarfs. White dwarfs are the highly dense and compressed remnants of dead small to medium sized stars. If a less massive star is orbiting a white dwarf, the dwarf’s gravity may strip material from the smaller companion. Over time this material builds up on the surface of the white dwarf. Finally the gaseous material becomes massive enough that pressure and temperature is large enough for a thermonuclear explosion to occur. The explosion “blows” off the accumulated material though is not strong enough to do much damage to the white dwarf. During this explosion, the star will appear to brighten by 8-15 magnitudes (1500 to 100000 times brighter). After the nova eruption, the process starts all over again resulting in a series of nova events every tens to thousands of years.

How do we know it is a nova? The simple answer is spectroscopy. The spectrum of the star shows the tell-tale sign of an explosion ejecting material at velocities of ~700 km/s. Another friend of the blog, David Balam, was able to spectroscopically observe the object with the 1.82-m Plaskett telescope on Vancouver Island. The spectrum (seen below) showed V496 Scuti to be a nova of the FeII class.