The evening sky is graced by two planets, brilliant Venus low in the western sky and Saturn in the eastern sky. As nice as these planets look to the eye, telescopes can reveal even more about these worlds.

Saturn has 61 satellites (moons) with good orbits. It undoubtedly has many more and if we count every particle in its rings the count would probably be in the millions. Most of the 61 known satellites are very small (a few miles in diameter) and only observable in large telescopes or by the Cassini spacecraft that is currently orbiting Saturn.

Luckily a few satellites are observable in small backyard telescopes. Titan, the 2nd largest satellite in the solar system, is even visible in binoculars. Through my backyard 12″ telescope I can usually see 6 satellites. Imaging can pick up a few more. Images from the night of March 15/16 found 7 satellites in the close vicinity of Saturn.

The below image is a combination of two different exposure times, very short exposures to see the rings and cloud bands of Saturn and longer exposures to detect the moons. The detected moons include Enceladus, Tethys, Dione, Rhea, Titan, Hyperion and Iapetus. 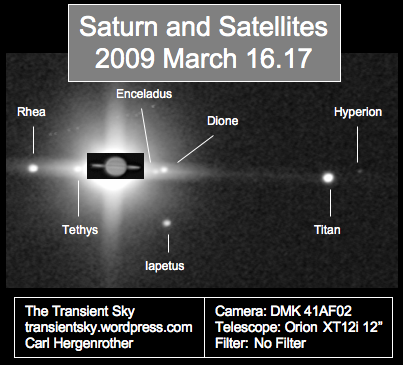 Venus continues to drop closer to the Sun every evening. As it comes closer to Earth and moves between the Sun and Earth, Venus is becoming larger and more narrow. The below collage documents the apparent changes in our view of Venus over the past 9 days.

A more dramatic display of the changes over the past 9 days can be seen when images from March 8 and 17 are placed next to each other. The camera and telescope used is the same for each night. The magnification used is also the same. The change in size and thickness of the crescent is due to Venus moving closer to Earth. 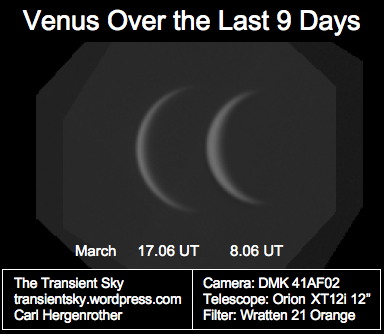