Based on the number of comments I’ve been receiving, many people have been enjoying (or at least startled) by the grand display Venus has been putting on for the past few months. Tonight may be the best display yet as a very thin crescent Moon will join Venus.

This evening the Moon and Venus will be within 1.2 degrees of each other (for comparison the Moon is about 0.5 degrees across).

While you are observing the two, there are a few fun things to watch out for. One, even though the Moon is a thin crescent, can you see a faint glow from the rest of the Moon? Your eyes aren’t deceiving you, what you are actually seeing is called Earthshine. If you were standing on the nightside of the Moon right now you would be seeing a Full Earth. Just like the Full Moon on Earth, the Full Earth is very bright. In fact, it is much brighter than the Full Moon since the Earth is bigger and more reflective. So just like on Earth where the landscape is illuminated by the Full Moon, we are seeing the same phenomenon on the Moon.

Second thing to look for, if you have a pair of binoculars or a telescope (any size will do) check out the shape of Venus. Venus is also a thin crescent and is shaped  very similar to the Moon. Below is a picture of Venus that I took through my 12″ telescope on the evening of Feb25. Venus will still look pretty much the same tonight.

The image below was taken by myself with a 12″ reflector and DMK 41AF02 camera on the evening of Feb 25. 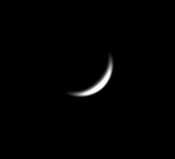 Again if anybody gets some cool pictures of the pair and would like to share them with other blog readers, post a link in the comments section and I will include them in a future posting.

As for Comet Lulin, the comet still remains bright enough to be seen without optical aid if you live at a very dark site. For the rest of us, a nice pair of binolculars will suffice. Tonight the comet is easy to see as it is located just to the west (or right) of Regulus, the brightest star in Leo. It is best to wait until after 8:30 pm when the comet has risen high enough above the eastern horizon to be seen.